A great meeting in a full stadium! 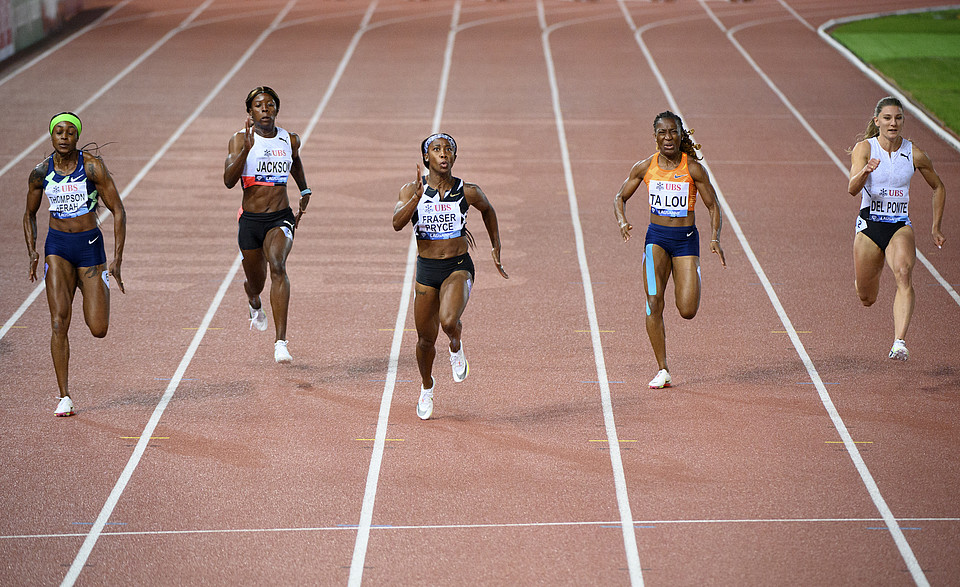 Rojas and Fraser-Pryce delight the audience.

In a full stadium(12,850 spectators), Yulimar Rojas and Shelly-Ann Fraser-Pryce stunned the Lausanne audience with their 2nd and 3rd best performance of all time, in the triple jump and 100m respectively. The Venezuelan and the Jamaïcan were clearly not tired after the Toyo Games for this 9th stage of the Wanda Diamond League.

"Thank you so much for the energy!". Winner of the 100m, Shelly-Ann Fraser-Pryce thanked the delighted crowd, which carried her to another fabulous performance despite the cold weather. With 10s 60, the 34-year-old Jamaican clocked the third fastest time in history, behind Florence Griffith-Joyner's 10s 49 in 1988 (world record) and Elaine Thompson-Herah's 10s 54 last week in Eugene.

In Lausanne, Thompson-Herah, five-time Olympic champion, was 2nd with 10s 64. The Jamaicans achieved the triple, as in Tokyo, with Shericka Jackson's 3rd place (10s 92), while Ajla Del Ponte (6th with 10s 97) won her Swiss duel against Mujinga Kambundji (7th with 11s 01).

At the end of a great battle and a very impressive regularity, Yulimar Rojas achieved the second best performance of all times in the triple jump with 15m52 on her 4th attempt. The Olympic champion came within 15 cm of her world record set at the Tokyo Olympics. She was also reached 15m56 on her 1st attempt, but the wind was too strong, and 15m42 on her 3rd jump (steady wind). Rojas proved to be capable of reaching the 16m. She won the competition after a final jump at 15m11, according to the new formula of the "Final Three" which separates the first three at the 6th attempt, in front of the Jamaican Shanieka Ricketts (best approved  jump at 14m81, and 15m02 with too much wind).

The 110m hurdles was one of the best races of the evening, even if the times will not be certified because of the wind. Fourth at the Tokyo Olympics Games, Devon Allen took a little revenge. The American won in 13s 07, ahead of the best European runner, Jason Joseph (13s 11). Joseph is only the second Swiss athlete to win a Diamond League podium in Lausanne, four years after Lea Sprunger (2nd in the 400m hurdles in 2017). The Tokyo Olympic champion, Jamaican Hansle Parchment, was unstuck before the last hurdle and finished freewheeling (8th in 13s 58).

Ingebrigtsen did not disappoint

Despite the disruptive wind, Jakob Ingebrigtsen finished a wonderful race to win the 3000 m in 7m 33s 06. Taking the lead from the start with the Australian Stewart McSweyn, the Norwegian Olympic champion of the 1500 m was reeled in and overtaken by the Ethiopian Berihu Aregawi, to finally take over after a frenzied sprint.Thanking the public  the Norwegian said "It was a very difficult night with these conditions."

The strong wind (more than 3 m/s) prevented the times to be certified but not the performance of Kenneth Bednarek and Fred Kerley. The two Americans, respectively silver medallists in the 200 m and 100 m in Tokyo, celebrated a double in 19s 65 and 19s 77 respectively. Olympic 400m champion Steven Gardiner (BAH) was third in 20s 11.

The shot put competition showed the advantages of the new "Final Three" formula, where the victory between the first three after five attempts is decided in the final attempt. With the other events stopped during these final throws, the audience had all eyes on the throwers, not used to so much attention. Ryan Crouser, the Olympic champion and world record holder, enjoyed his last throw at 22m64, which allowed him to win the competition ahead of New Zealand's Tom Walsh (22m10) and Croatian Filip Mihajlevic (20m36). In his first throw, Crouser broke the meeting record with 22m81.

The German Johannes Vetter, suffering from an ankle injury in Tokyo, made a remarkable comeback to win the javelin competition with a final throw of 86m34 and a best attempt of 88m54.

In the long jump, the Serbian Ivana Spanovic won with a final jump at 6m73, but without achieving the best jump of the evening, which was the prerogative of the Swede Khaddin Sagnia with 6m92. But she didn't go as far as Spanovic in the decisive 6th attempt.

Tokyo bronze medalist Femke Bol remains undefeated this season in the Diamond League in the 400m hurdles. The Dutchwoman won in 53s 05, ahead of the American Shamier Little (53s 78) and the Ukrainian Anna Ryzhykova (54s 32). For her farewell to competition in front of her public, Lea Sprunger finished 5th in 54s 72.

The British defeat the Swiss

The cold evening and the wind prevented the 400m runners from showing their full potential. The race ended in a surprise victory of the American Wilbert London (45''17), double world champion with the American relay in Doha (mixed and 4x400 m), ahead of Isaac Makwala (45''20). The Olympic champion and world record holder in the 400m hurdles, Karsten Warholm of Norway, did not maintain his performance. He finished 4th in 45''51.

Mariya Lasitskene honored her status of Olympic champion to win the high jump with 1m98. The Russian under neutral flag won by the number of attempts in front of the Ukrainian Yaroslava Mahuchikh (1m98 also), 3rd in Tokyo, and the Australian Nicola McDermott (1m95), silver medalist in Japan.

The final take of this magnificent evening was the women's 4x100m, in which Great Britain, bronze medallist at the Olympic Games, won thanks to a fiery final stretch by Darryll Neita. In 42s 44, the British beat the Swiss quartet led by Ajla Del Ponte and Mujinga Kambundji (42s 47) by 0s 03.

Five after his first success at  Eugene, The Canadian Marco Arop celebrated the second victory  of his career in the  Wanda Diamond League. He won the 800 m in 1m 44s 50, in front of the olympic champion Emmanuel Korir (1m 44s 52) and another Kényan, Ferguson Rotich (1m 45s 48), bronze medalist in Japan.