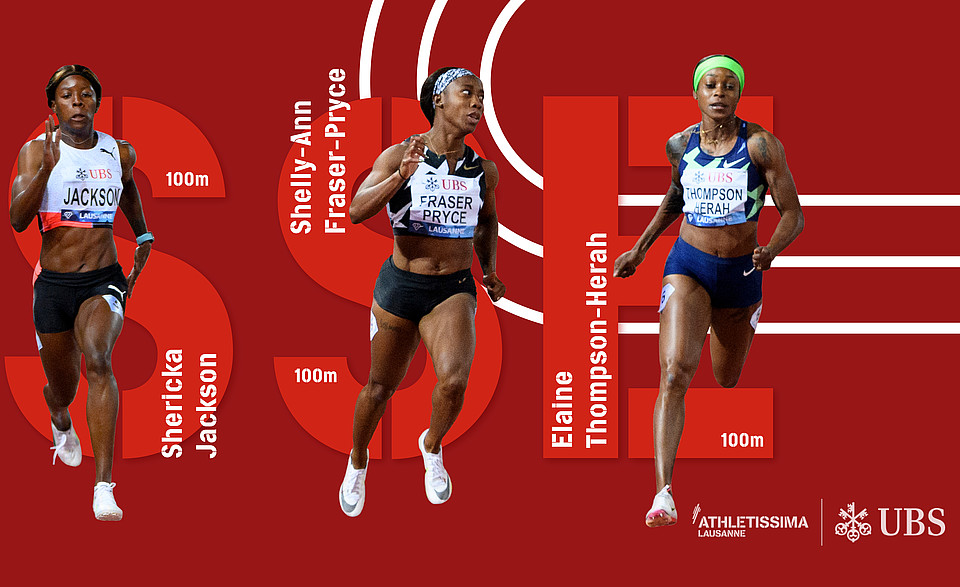 The line-up for the 47th edition of Athletissima, on the 26th of August, has been finalised, and the last list of entries published this Thursday suggests sumptuous clashes: in the 100m women all of the world’s best will be at the start. The meeting will bring together 14 world champions and 12 individual Olympic champions (many of them holding both titles), for an exceptional display.

"We have not had such a high concentration of athletes of the highest level since 2012, the year when the meeting was sold out with Usain Bolt", stated Jacky Delapierre, the boss of Athletissima, the 3rd last stage of the Wanda Diamond League 2022.

The names of the latest entrants are something to dream about. Shericka Jackson and Elaine Tompson-Herah will challenge fellow Jamaican Shelly-Ann Fraser-Pryce (previously announced) in the 100m. This race, which words cannot describe, will bring together almost all the finalists of the last World Championships in Eugene (USA). Thompson-Herah is none other than the reigning triple Olympic champion in the sprint (100, 200 and 4x100 m) and holder of the second fastest time in history in the 100m (10”54). Shericka Jackson became, last month during her world title in Eugene, the second fastest athlete in history in the 200m (21''45). And as a reminder, Fraser-Pryce is five-time world champion in the 100m, an unprecedented feat.

Bets are also open on the men's 200m. The line-up promises intense suspense and probably stratospheric times since the best will be present there too. The American Michael Norman, reigning double world champion in the 400 and 4x400 m with a personal best of 19.70 in the 200m, and the young athlete from Liberia Joseph Fahnbulleh (20), 4th in Eugene, will come to tease the stars of the last World Championships, the Americans (previously announced) Noah Lyles and Erriyon Knighton on the half-lap.

One of the greatest champions of all time in the middle and long distances will be at the start: the Dutch Sifan Hassan, double Olympic champion (5000 and 10000 m) and bronze medallist in the 1500 m at Tokyo 2021, has entered the 3000m.

Over 100m hurdles, the race will be mouth-watering: the Nigerian Tobi Amusan, recently having set her world record (12''12) established in the semi-finals of the Worlds which she won, is added to an already impressive list of champions. In the men's 110m hurdles, reigning double world champion Grant Holloway (USA) will face Olympic champion Hansle Parchment (JAM). And over the 3000 m steeplechase, it is the Moroccan Soufiane el Bakkali who will race against the Ethiopian Lamecha Girma, two men who will try to go under 8 minutes.

The triple jump field is completed by the entries of the American Christian Taylor, quadruple world champion (2011, 2015, 2017 and 2019), who is attempting his comeback, and by the Serbian Ivana Vuleta (née Spanovic), the double indoor world champion in the long jump who will, this time, tease the best triple jumpers. A guaranteed show for those in the facing stand.

Over 1500m, several athletes capable of descending below 3’30”, including the Kenyan Timothy Cheruiyot, 2019 world champion, will lead the race.

The organisers had to refuse bibs to several renowned athletes, as the demand exceeded the number of places available. In any case, the quality is such that, in addition to the pursuit for fast times and performances, the individual battles for first place will add a lot of spice.