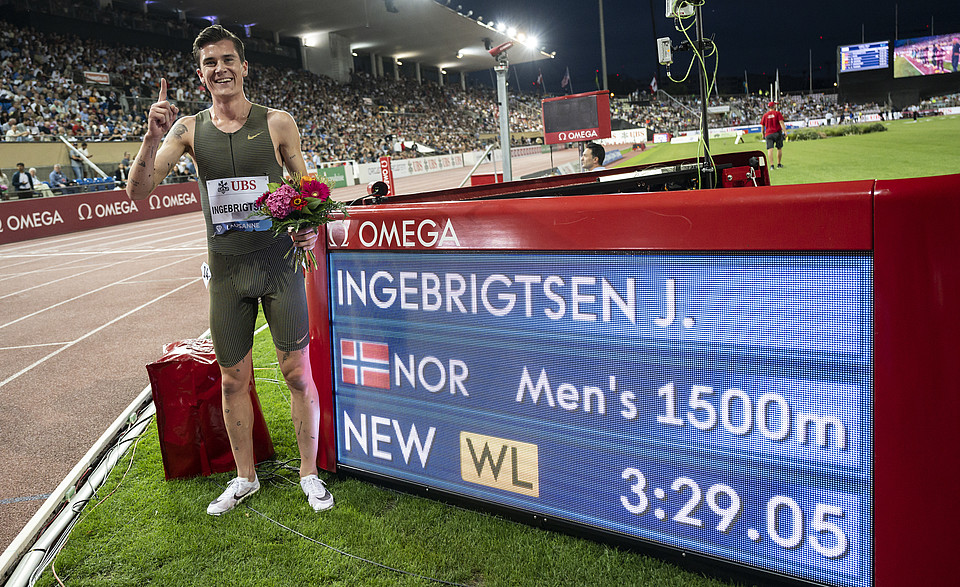 The middle distance was the star at Athletissima. Jakob Ingebrigtsen achieved the best World performance of the year, in the 1500 meters at the end of a fantastic race, while the Moroccan Soufiane El Bakkali signed a magnificent solo ride over 3000 meters steeplechase, arousing the admiration of the 13,000 spectators.

« It was a really nice race,” », said the very efficient Jakob Ingebrigtsen soberly. The Norwegian took a sort of revenge from a distance. After having to ‘settle’ for the silver medal in the 1500 meters at the Eugene Worlds, behind the Briton Jake Wightman, he robbed the latter of his best World performance (MPM) of the year. In 3:29:06, the quadruple European champion and Olympic champion tamed the Kenyans by escaping irresistible before the bell.

The women’s 100 meters was shaping up to be the highlight of this penultimate stage of the Wanda Diamond League. Alas, the five-time World champion Shelly-Ann Fraser-Pryce forfeited at the very last minute, after having suffered a muscle injury during the warm-up. Jamaica’s bad luck continued with the disqualification for a false start of three-time Olympic champion Elaine Thompson-Herah. And the third of the Jamaicans, Shericka Jackson, received a warning. It was finally the American outsider Aleia Hobbs who gave her best (victory in 10:87), ahead of Jackson (10:88). The European 200 meters champion, the Swiss Mujinga Kambundji, wasn’t having such a great day (6th in 11:15).

Lyles as the boss

Soufiane El Bakkali gave a recital in the 3000 meters steeplechase. The Olympic and World champion was not stingy with his efforts and blasted the peloton to win alone in 8:02:45, to the ovations of the public. The Moroccan left the athletes of the highlands of East Africa at ten seconds and more. Not too bad for someone who said he was “tired” after the Worlds in Eugene last month!

The Jamaican hope Rasheed Broadbell wrote one of the great stories of the evening. He was on the 110 meter hurdles waiting list and would not normally run. Thanks to a last minute withdrawal, he had his chance and seized it in the best way: with a victory and a first time within his career under thirteen seconds (12:99). The reigning World champion Grant Holloway (USA) finished 3rd in 13:11, behind his compatriot Trey Cunningham (2nd in 13:10), while the Swiss record holder Jason Joseph finished far (8th place in 13:66)

Yulimar Rojas won, but then shook her head in annoyance after her last attempt at the triple jump. Despite the strong encouragement of the public, the World number one in Women’s athletics did not improve on her 15.31 meters successful at her fifth attempt. The Olympic and World champion won by a wide margin, not so far from her World record (15.74 meters). She provided the show.

Femke Bol had saved some juice. A week after her unprecedented, never seen before triple at the European Championships in Munich (400 meters, 400 meter hurdles and relay 4x400 meters), the Dutch has managed the feat of taming the athletes from across the Atlantic. The champion, trained by Laurent Meuwly, measured her race very well to win in 52:95, the meeting record. Her closest pursuers finished a second behind her.

On the 400 meters flat, Marileidy Paulino, World champion in the 4 by 400 meters mixed with the Dominican Republic, won in 49:87.

It must have been extremely fast racing, it was ultimately a tactical battle. The women’s 3000 meters saw Burundi’s Francine Niyonsaba snatch victory at the photo finish in 8:26:80, showcasing her qualities as a former 800 meters runner. The amazing American Alicia Monson finished 2nd at 0:01, in a race that turned to disappointment for favourites Sifan Hassan (4th, after hitting the edge of the track) and Laura Muir (7th place). The fact that Niyonsaba broke the meeting record despite a rather “slow” start to the race further embellishes his performance.

The return of Chopra

Superstar in India, the Olympic champion Neeraj Chopra held his rank in the javelin. He secured his place in the Diamond League final in Zurich by dominating the competition with a throw of 89.08 meters, before meeting with the IOC President Thomas Bach, delighted to greet the idol of the Indian subcontinent. “I’m especially happy because I’m returning from injury,” recalled Chopra, who missed the Commonwealth Games.

The triple jump resulted in a magnificent and quite unexpected triple Cuban. Andy Diaz Hernandez won with 17.67 meters, cementing his lead at the top of the Diamond League standings, ahead of Lazaro Martinez (17.50 meters, personal best) and Jordan Diaz Fortun (17.41 meters).

The wind did not help the pole vaulters. The Slovenian Tina Sutej, at her best shape at 33 years old after her bronze medal at the last Indoor Worlds, won with a leap at 4.70 meters. The Swiss Angelica Moser did not climb higher than 4.50 meters (5th place).

In weights, World record holder Ryan Crouser suffered a rare defeat (2nd with 22.05 meters), behind his compatriot from the American Joe Kovacs (22.65 meters).

High jumpers remained “within” their potential. The Ukrainian Andriy Protsenko, with 2.24 meters, won the number of tries by achieving a clear round on his three heights crossed. Olympic and World champion Mutaz Barshim (QAT) took 2nd place with the same performance ahead of JuVaughn Harrison (2.24 meters as well).

Excluding Diamond League events, the women’s 800 meters was of high quality. It allowed the French Rénelle Lamote to beat her personal best (1:57:84) and win such a prestigious victory. The nice surprise came from the young Swiss Audrey Werro. Full of daring, the junior World vicechampion followed the fastness of the pacemaker before faltering a little in the final stretch, while descending - for the second time in her young career - under two minutes (5th place with 1:59:87). Just behind the 2019 World champion, Ugandan Halimah Nakaayi (1:59:73). The other Swiss in the race, Lore Hoffman, came in 8th place (2:00:08).

The evening began with a fine honor bestowed on Athletissima : the World Athletics "Legacy" Commemorative Plaque was presented in recognition of all the exploits achieved at the meeting over the years. Two young local athletes unveiled it in front of the podium, in the presence of the legendary Serguey Bubka, best pole vaulter of all time, Thomas Bach, President of the IOC, Pierre Tenger, President of Athletissima, and Jacky Delapierre, the boss and founder of the event. “This plaque is primarily a sign of recognition for the 700 to 800 volunteers who work for the event each year,” said “Jacky”.

The torchbearers comfort each other

The Swiss torchbearers reconciled with themselves and with the public by winning the 4 by 100 meters in 42:91. Eliminated in the series of the European Championships in Munich, the national team benefited from the return of Mujinga Kambundji to overtake the Netherlands (43:02) and Spain (43:75). The time is good but would not have been enough to grab the podium at the Euro, where Italy had taken bronze in 42:84. The Swiss team lined up with Géraldine Frey, Kambundji, Salomé Kora and Ajla Del Ponte, who held up just fine in the home stretch. The Swiss women well deserved their lap of honour in the cart, at the end of the meeting.